Delta is 10 today!  To celebrate, we removed her banadage, and then later had Three Dog Bakery treats.  I'll let the pictures tell the story...

Here are some BlackBerry photos of Delta at home after her surgery.  She is feeling quite good more than 24 hours later.  So happy!

I spent a long morning on pins and needles, but Delta is doing well!

The xrays were clear and the tumor was removed without any issues - good margins were taken and still there was enough tissue to stitch the incision closed.

She was a very good girl for them, and a tired one tonight.  I have a make-shift xpen created in my living room to keep her quiet and the rowdy boys away from her.  She has been sleeping the evening away on the pillows in the space.

To say I'm relieved is an understatement!  There is always the possibility that the tumors will recur, but for now, we are in the happiest of places that Delta will be with us for a while longer, with any luck.  Photos to come later. :)
Posted by doglove at 22:30 1 comment: 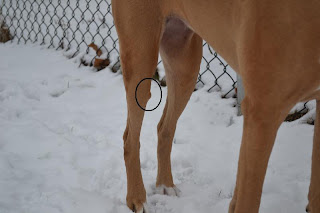 I wasn't going to post anything until next week but I need all the positive vibes I/Delta can get.
Yesterday, Thursday, January 5, 2012 at 10:30 a.m., my world was turned upside-down yet again. A phone call from my vet confirmed that Delta has a malignancy in her right rear leg (this is not the same leg that had the sheath injury a few months back).
This was a result of concern I had over a lump near her knee, which I thought was a cyst. It appeared around the end of November. However, last week on my Christmas vacation, it appeared as if it had gotten a little larger and so I made an appointment to be seen last Friday. The vet was concerned as she could tell the lump was attached to the tissue. A fine-needle aspiration was done and due to the New Year's long weekend, wasn't sent to the pathology lab in PEI until Tuesday.
It's not known yet what type of sarcoma she has based on this aspiration; on Monday morning, she will be undergoing x-rays and a subsequent biopsy or lump removal.
I was warned that depending on how large a margin needed to be removed, there is a possibility that she may not be able to stitch the incision back up as there is no extra skin in that area. It would mean that Delta would need to wear a bandage for a long time, changing it regularly, due to an open wound.
The vet will be instructed that should the x-rays reveal bony involvement, particularly if it has metastasized to the chest as osteosarcoma will do, that she should NOT remove the lump. I'm realistic in knowing that at 10 years of age next week, I don't have years left with Delta and do not want to reduce her quality of life with treatment that isn't likely to work.
Please cross fingers/pray that she has the lesser of the sarcoma evils. I'm devastated, but at the moment, remaining practical until a diagnosis is confirmed.
Posted by doglove at 21:47 3 comments:

I had a post published yesterday wrapping up 2011, but decided it was too depressing to leave up and therefore it was deleted.

I'll just say that in a year of so much sadness (Oscar and Judah's deaths, among other things), I'm glad that 2011 is in the past and am looking forward to only good things in 2012 (Walker's adoption for one!).

On December 18th, I took Brosa to attempt to pass his Retrieval Proficiency Test (RPT) with the Canadian Disc Dog Association.  Unfortunately, he flunked as he wanted to play.  I found some photos online that were taken while we were doing the test:


Walker's mange seems to be under control now.  A re-scrape revealed no live mites, but his feet and throat are still quite pink/irritated and his belly/groin has now developed pimples (which is a possible side-effect of having Demodectic Mange).  He will continue to be treated with the medication for a couple of more months to ensure the mange is finally behind him once and for all.  His hair is thin/non-existent in places, so I have a treatment that is said to help speed up re-growth.

Still working on some house-training issues with him (he has been wearing a belly-band in the last little while), and also confidence building.  He did well in obedience class and also continues to excel with his house-manners.  I may think about taking him to agility to further his confidence building exercises.

Walker was very quiet during the fireworks last night (Delta trembles, and Brosa barks his fool head off).  He did have an oopsie in the house as I didn't let the dogs outside during the fireworks, nor for a while afterwards while the neighbourhood residents were still outside celebrating.  So I would say he definitely was affected by the fireworks; just not in the same manner as Delta and Brosa.

We had a quiet Christmas at home - yesterday, the dogs enjoyed their gifts of Tartar Bones for the afternoon and evening as the old year faded to black.

Today would have been my beloved Duncan's 12th birthday.  I miss him every day. 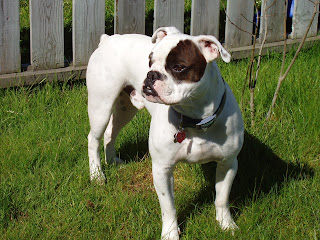