A couple of weeks ago, I came home from work to find that the outer corner of Delta's left eye, inside the lid, had a large fleshy lump which was bleeding.  I considered giving her Poly drops but decided to err on the side of caution and took her to the Emergency Vet instead. 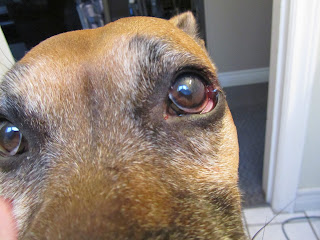 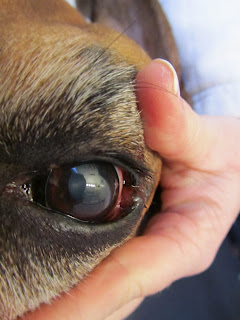 We were seen right away, and told that it could be a stye, or a growth/mass of some sort.  We were provided with an antibiotic drop to treat it as if it was a stye, to see if it would go down some (it has, but not all the way).

At our follow up appointment with our vet last Monday, he confirmed that what she has is a growth on her tear duct, which is common in older dogs and can only be removed with laser surgery.  This is booked for Tuesday of this week.

In the meantime, I was preparing for, and had, Lasik eye surgery last week. 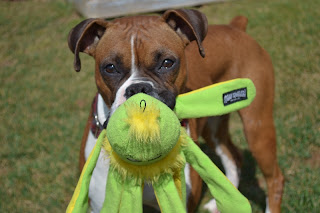 It has been 1 week and 2 days since Dita arrived to our home and I must say she has fit in wonderfully!  She and Delta play more together as each hour goes by (they now wrestle and tug toys regularly).

Kayzee the cat is also appearing regularly to hang out on the couch with us, and last night she even went as far as to rub up against Dita, giving her a head-butt as well.  The floor needs a little more work as Dita still wants to play/chase Kayzee when she's walking around.

We had our first walk together yesterday and it didn't go too badly.  Pulled a bit for the first part, but then settled for much of it.  The Freedom Harness is a great help for pulling.  She can fit into Brosa's harness and I'm okay with it being used by her.

Time to start some basic play 'n' train with her. She is still on antibiotics for her abscessed foot, which looks much better but is still healing.  Once she's done that, she can get her vaccines and then she'll be cleared to start obedience training.  We use Lietash Canine Academy and their Family Companion classes.

Here are a few photos from the past week. :)

For the past 2 months or so, I had been seriously starting to think about bringing a new dog home.

The first dog that got me on that path was a young blind Boxer from Boxer Rescue Quebec.  Carson was still on the website as needing a new foster or permanent home.  Lucky for him, he was already adopted into a loving home, right here in NS in fact!

The next dog to grab hold of my heart was Troy, at Homeward Bound City Pound.  There was just something about that little tank, a Valley Bulldog mix.  Alas, he was not the one for us either (he's still waiting for his family - needs a home that will work on his manners, particularly regarding toys).  He has a few *let's call them quirks*, which would be stressful to Delta and at her age, I'm not interested in putting her through that.  We want an easy one.

Which brings us to a young (1.5 years) female Boxer in need via my friend at Boxer Rescue Atlantic Canada (or, East Coast Boxer Rescue).  I picked up this little girl via transport on Friday supper hour. 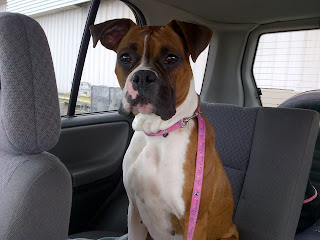 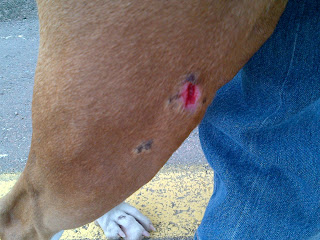 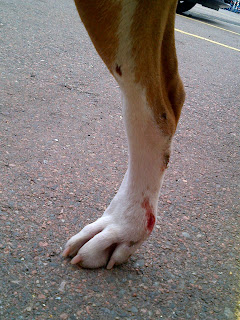 She came to me with an injury that had occurred in her former home just before they surrendered her to the rescue volunteer.  She has been allowed to run at large and most likely was injured in the woods.  She suffered several punctures on her feet and legs, the worse of which created an abscess on her right rear foot. She has never been vetted, had puppies at the tender age of about 9 months, and on a very poor diet.  Despite all of that, she is in beautiful shape, doesn't appear to have any parasites, and is a friendly, sweet girl!

She had a vet visit yesterday morning to confirm nothing was broken in her foot.  Xray, antibiotics, pain meds and Sentinel equals one expensive dog in less than 24 hours! 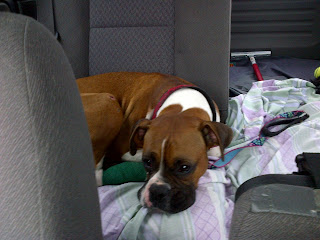 She and Delta hit it right off, although it has been quiet time until this morning.  She is obviously feeling much better!  She is putting her foot down and using it more, and best of all, the Boxer games have started!  How I love to see them play. :) 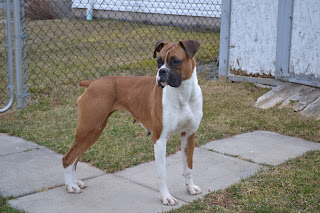 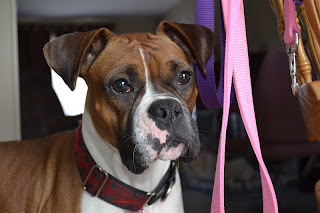 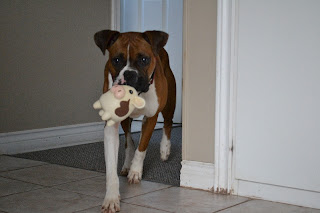 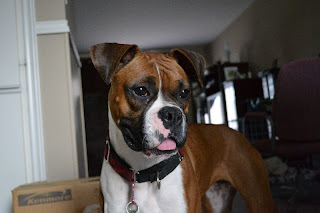 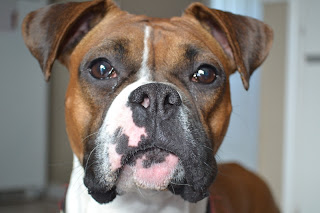 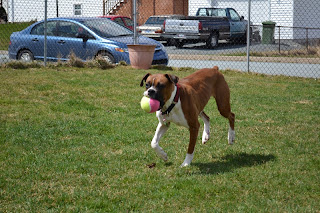 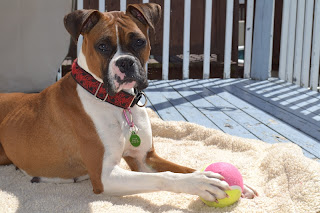 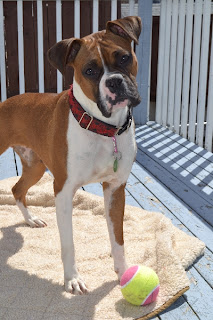 She came as a foster to see if she will be a right fit for my home, and it seems like she may be.  She's just a lovebug.