Well, we still don't have an answer as to what EXACTLY is going on with him medically, other than the fact that his adrenal glands are producing too much cortisol.

He drinks too much, pees too much, is losing his muscle mass, is lethargic/depressed, no desire to play, weak/can't exercise.

This is a hard departure from my Flying Squirrel Monkey Man/The Turd who I love so much.

As the last test turned up negative, Brosa was started on a course of drugs called Lysodren, commonly used to treat Cushings Disease.  It is hoped that this will lower Cortisol production and stabilize him, before testing for Atypical Cushings.

Lysodren is treated very much like chemotherapy as it's so toxic.  Gloves are required to handle the pills and Brosa gets 1/2 a 500 mg tablet each 12 hours.  I wrap each half in a Pill Pocket and give to him with his meals.  The first pill was provided at supper on Wednesday August 22nd, and I stayed home the remainder of the week to monitor him, particularly through the weekend, to ensure he wasn't suffering any adverse reactions to this drug.

He also gets Denosyl (a liver support supplement) once a day, Tumil-K (potassium, added yesterday, to help boost his levels which are too low and may also improve his PU/PD) twice a day, Vitamin E once a day, and an antibiotic call Clindamycin twice a day (as it was suspected he had a possible cleft palate infection that was compromising his breathing).

On Friday, August 24th, while we were out on our deck, I showed Brosa his frisbee which was on the table.  He took it from my hands and trotted off down the steps into the yard with it.  The first time in almost 2 months he has shown any interest/possession in a toy. It really did my heart good!

We also went back to the lake for a quick cool off.  Given how weak Brosa is, he wore a life jacket in the water.  He did have tremors afterwards, so that was just a little too much exertion for him and therefore he won't be made to do that again in the near future, until that time comes (hopefully!) that he's feeling stronger. 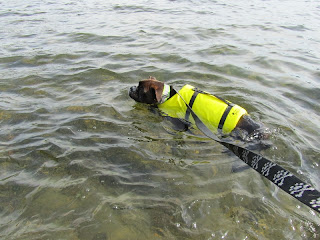 The following day, I purchased two new squeak toys for Brosa and Delta.  Delta, as always, immediately detected the smell of them in the bag, so I didn't waste any time given the toys to them.  Although Brosa broke his squeak in the first minute, the other still works as I type this, and either toy has barely left Brosa's mouth in the days to follow.  This is such a good sight to see!

Brosa is slowly showing interest in other toys I have recovered from storage (they were put away after the last foster dog, Walker, began to rip every toy to pieces, lol!).

His condition is "guardedly optimistic", but just seeing his interest in the toys seems positive.

Yesterday, blood was drawn to test his cortisol levels after 5 days on the drug.  It hasn't really gone down much more than a minuscule amount, and therefore the current dosage continues.  He will be retested again on Saturday morning.

Kayzee wasn't forgotten when I shopped for the new squeak toys.  In in effort to find fun things for her that wouldn't be eaten by the dogs, I decided to buy a cat grass kit.  While waiting for that to sprout, I also bought a bottle of catnip spray, which I sprayed on the old Cat Spa we have but hasn't been used in quite some time.  After giving it a thorough washing, the spa was placed on the floor in the sunny spot, and Kayzee proceeded to be in orgasmic heaven! 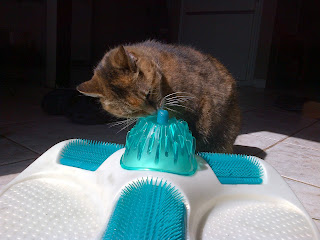 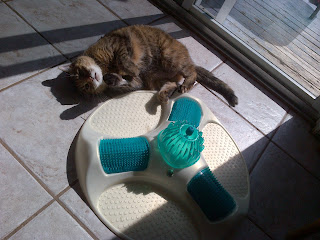 Stay tuned for future updates on Brosa's condition.
Posted by doglove at 16:19 No comments:

I could be forgiven for hoping the Mayans are right.

Still mourning the loss of my mother.  Gone too soon.  The liver transplant surgery should have taken place 2 years ago when she was added to the list, not when she was too sick to survive it.

No sooner had the funeral taken place and foster dog Walker had been adopted, that Brosa started having uncontrollable thirst and urination in the house.

Our primary vet, after spending $1500 in vet fees, multiple blood work and tests, xrays and emergency fees, simply gave up and said "it's stress".

I called bullshit on that, and went back to a vet we hadn't used in 2 years (I have a problem with the amount of time it takes to get an appointment there).

He certainly was up to investigating other tests and diagnostic possibilities.

Unfortunately, since July 9th I now stand at $2700 spent on additional bloodwork and tests, ultrasounds and various medications, and still no diagnosis for my poor boy.

My Turd, my Monkey Man, my 3 year old baby, is deteriorating, and no one knows what the hell is going on!  His results are closest to Cushings Disease, but not 100% so.

We are waiting on blood work results from the PEI college (blood drawn Monday August 13th) and as of Friday, still not in.  So what does the vet do when I report that Brosa is worsening?  Give me extremely toxic medication to treat Cushings (Lysodren, along with Prednisone to counteract the effects Lysodren may have on him) without a diagnosis of it.  I gave him one dose at supper and then thought better of it.  I'm not going to kill my dog with a drug he may not need.

I haven't had a full night's sleep (not more than 5 hours) since before my mother passed away.  I'm up 2-4 times a night with Brosa when he urgently needs to go outside (and STILL has pee to spare in the house).

I fear I may have to *be kind* soon as I don't want Brosa to suffer much longer.  His quality of life hasn't existed in almost 2 months (weak, lethargic, clearly not happy).

I know vets aren't miracle workers, but I need assurance from them that they care, that they're consulting with others in the field that may bring a fresh pair of eyes.  I'm not getting that, and I'm both pissed and heart-broken.

Here's a video of Brosa having a swim last week.  He was quite weak, but still gave it an effort to cool off.