Updates: Relay for Life and Oscar

I neglected to update on the results of the Relay for Life because I've spent much of the week recuperating from the sleep deprivation!  I sure can't bounce back from an all-nighter the way I used to, ha ha! 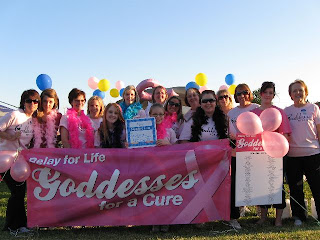 After arriving home the next morning, I managed to get a nap for 45 minutes until it was time to put all the crap treasures on the driveway for the the community yard sale.  How I managed to do that for the next several hours is beyond me!  I did raise $60, which also went to the Relay for Life: 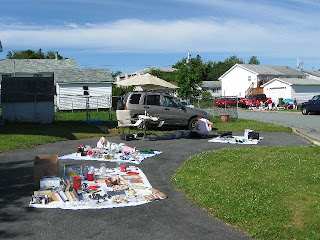 Poor Oscar.  He wasn't feeling too well that night and the next day, but he recovered from it.

Now, to make things worse, he injured his left rear leg last night.  As he was no better today, off to the vet we went and the diagnosis is a torn anterior cruciate ligament.  ARGH!  Not again!  Poor little buddy.  It's the opposite leg of the one that had the same injury in January 2009.  Rest and Metacam for the week and then will reassess to see if there is any improvement - if not, surgery will have to be discussed, although I don't expect it's likely given his age (12) and his heart health (Grade 4 murmur).  Hoping Shelly Beazley at Pawsitive Action will find time in her very busy new-mommy schedule to help him out as I credit her with his speedy healing the first time around!

My friend Joan posted the link to a downloadable application to make your photos look like paintings.  I did this one of Oscar while waiting to leave for the vet appt (photo from September 2009): 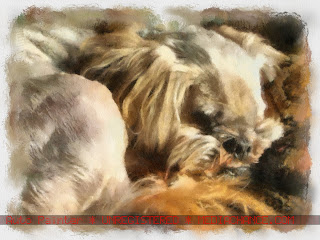 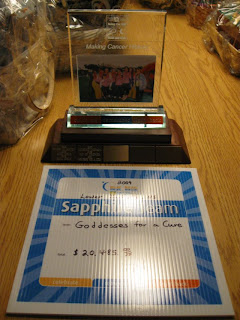 And now, for something totally not dog-related!

This is the Lower Sackville "Top Fundraising Team" trophy, which we received for the year 2009.  At our April info session, we received the sign with the 2009 team total which we can display at Tent City this year. 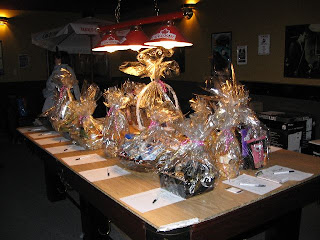 Last night we held our 2nd annual Silent Auction at Doolys in Lower Sackville.  2009 brought in almost $5k and we were up for the challenge to meet/beat that!

This is the gift basket table in the party room. 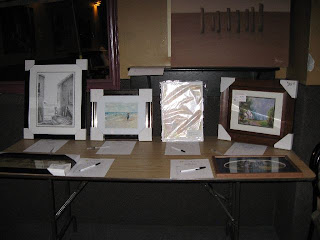 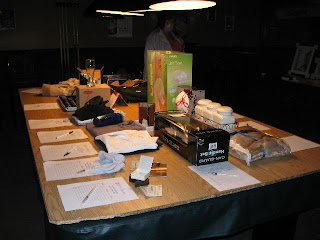 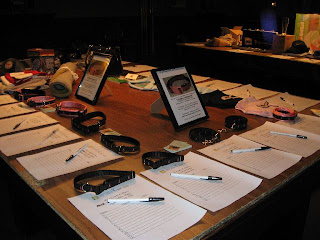 Table 2 (which held all of the East Coast Collars donation!) 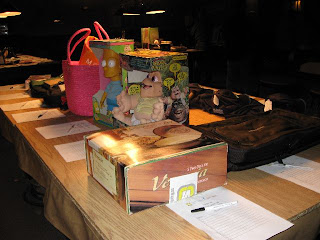 Table 3 - I just about lost my ever-lovin' mind when I saw Baby Sinclair from the t.v. show The Dinosaurs on there - I'd forgotten that show sadly, but did that toy bring back memories - loved it! 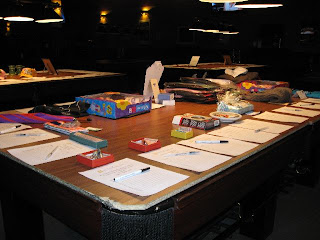 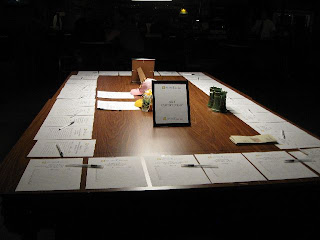 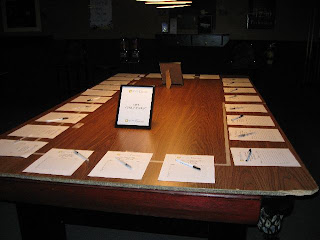 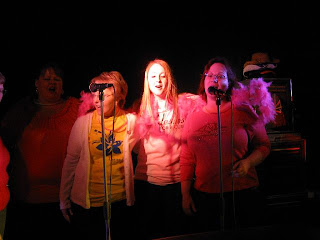 There was fundraising Karaoke with team-members, family and friends. 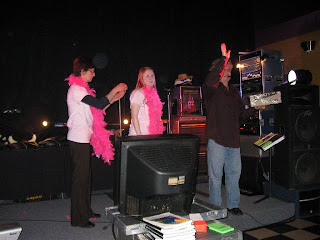 There was a live auction on 2 lemon meringue pies and a carrot cake - which raised almost $100 for the 3 of them! 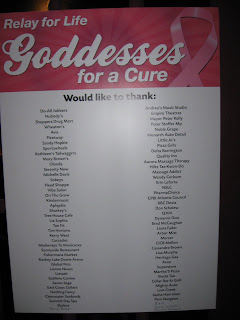 We had SO MANY individuals and businesses to thank for making this evening a success - over $7,300 was raised, bringing today's team total to over $27,000 with more to come for the next 5 days.  Simply amazing!!! 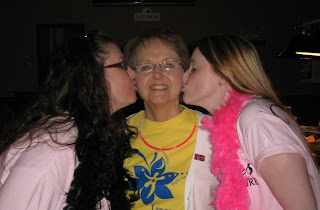 And finally, our reason to relay:  Our hero, our mother... a 2-time cancer survivor.

I love you mum!
xoxoxoxo
Posted by doglove at 22:35 No comments:

Today, the Pedigree Adoption Drive was in Halifax, NS, and Brosa came with me to go check it out!

Sadly, I left my camera at home.

It was a great info session with friendly volunteers.  Brosa, the glutton, went straight for the bowl of food that was out, and also ate 2 Denta-stix.

CTV news was on site to do an interview, and asked to film Brosa as well, so turn on the local news tonight and we may just see Brosa being his handsome self!  I'll see if I can upload a video later and edit this post.

This is the clip from last year's rain-soaked Dog Jog on June 21, 2009 where Brosa makes his first appearance on t.v. playing with a couple of adorable adoptable pitties!:

And while we're at it, it reminded me that Oscar also made a t.v. appearance at the SPCA Dog Wash on August 22, 2004, which was just one week after I adopted him! - here's that clip:

East Coast Collars have generously created an online fundraising special which benefits not one, but 3 different causes!

As you may know, I am supportive of Boxer Rescue of Atlantic Canada and Boston Terrier Rescue of Canada, as I am a foster home for each.  There is a special fundraising event for both rescue groups on the above page link.

In addition, East Coast Collars has also created the PINK RIBBON GODDESS COLLAR event, which supports my Relay for Life team, "Goddesses for a Cure".  The team was created by my sister in 2007, in honour of our mother Judy, a 2-time cancer survivor. 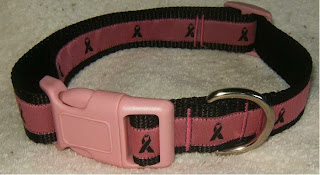 Each of the 3 collars depicted on the fundraising page are $25.00 Canadian - any size & style, and shipping is included!

This fundraiser is currently active, until July 3, 2010.  100% of the purchase price will be donated to the cause identified by the collar purchased.


The Goddesses for a Cure gratefully thank EAST COAST COLLARS for her generosity and support! 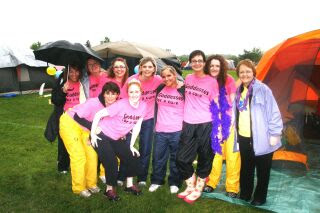 Should you wish to pledge the team directly (and receive a tax receipt for your donation), please click on the link attached to the team name above, and select the blue button below the photograph on that page.  Thank you for your support!
Posted by doglove at 09:51 1 comment:

Despite being a "rescue" dog (August 14, 2004), I was fortunate enough to have the original vet records for Oscar and know that today, June 2nd, is his birthday.

I still remember his adoption day clearly.   You see, Delta and I, and the 2 cats, had just moved into our home on May 31st that year due to a breakup.  My ex had kept Duncan at the time.  Delta, being the highly sensitive and nervous little girl she was, did not fare too well in our new environment without her brother and papa around too.  It was so sad to see her this way, nervous and losing weight, in the place that was to give us our new start in life.  Luckily, my ex and I had remained friends and Duncan spent frequent weekends (and weeks) with us until he was returned to me permanently.

Knowing Delta was missing her companion, I decided there was no time to waste in adding a second dog back in our home.  A co-worker had come across Oscar, but passed his info on to me when her landlord renenged on his agreement to let her adopt. 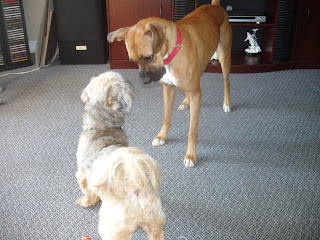 Joan M was the foster home for Oscar (who was owner surrendered and therefore not "officially" an SPCA dog) and she drove him to my house for a home visit and meeting with Delta.  Well, it was *like* at first sight!  They raced and tore around the yard, having a ball.  Joan was quite happy with what she saw and made arrangements to come back a day later for the formal adoption. 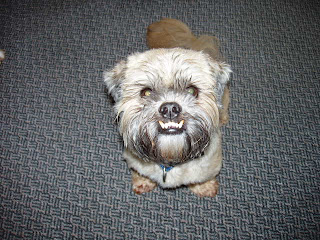 On August 14, 2004, I signed the adoption papers for Oscar and gave Joan a cheque for his adoption fee; in the meantime, we heard a big howl and discovered that Oscar was chasing poor Judah down the stairs.  Oops?  Not cat-tested?  Dilemma!!  If not for the fact that Delta NEEDED Oscar's companionship, I would have given Oscar back right then.  However, I decided to work with him because surely to God he would become acclimated to the cats' presence within a few months, right?

WRONG!  Sadly, Oscar is a frustrated killer (frustrated, because he hasn't succeeded yet, although he did send poor little Zee to the emergency a year later - he got through the barrier and got her by the tail which resulted in several stitches).  6 years later he still wants to attack the cats if given the opportunity, but he is much less reactive to them on the other side of the baby gates now.

In addition, Delta was the only dog for a very long time that he took to instantly!  He seems to favour:
It was never intended to keep Oscar after that first year due to his extreme hatred of the cats, but in order to rehome him and not set him up for failure AGAIN, very strict guidelines needed to be in place; and unfortunately, a breed of dog like Oscar (with his particular quirks) is a challenge.  He probably couldn't be in a home with animals other than dogs (and even that wasn't a guarantee - he would have been happy to be an only dog with undivided attention from his people).  He couldn't be in an apartment/condo due to his reactive barking.  He's a lot of dog in a 20 lb body and not really ideal for senior citizens, AND he's no lap dog.  Lhasa's are very independant and need to do their job, which is to sound the alarm when trespassers are spotted.

Subsequently, he has been diagnosed with a Grade 4 heart murmur and also has a weak leg from an ACL injury; he really would not be a popular choice now, if I were to attempt to find him another home - which I'm not.  He's here to stay until the end of his life and I do my best to spend my time with the cats even though they don't get to "live" with us in the rest of the house.

Between his cat aggression and dislike of most dogs, it's no wonder he earned the monikers "Rat Bastard" and "Lhasa Asshole"... 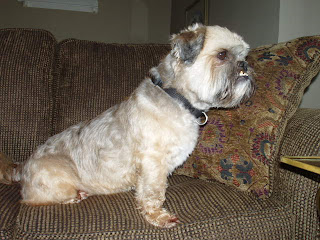