The bad news is that Delta's corneal-ulcer has flared up again and we're back up to treating it with drops 3 times a day.  She is also exhibiting some discomfort and is rubbing her eye, so we may have to add some numbing drops as well (and perhaps make her wear an e-collar to prevent the rubbing).  My poor little girl. :(

The good news is Oscar's staples have been removed and Dr. C says the repair to his cruciate appears to be successful.  I'm to call back in 2 weeks to give him an update on Oscar's mobility, since it's still not great, but I suspect he's tremendously weakened and needs time to build up his strength again.

Whew, good news!  Delta had her 1-week check up tonight re: her corneal-ulcer, and the inflammation is going down... she's on the mend before it turned bad!

She gets another recheck in 2 weeks, unless things take a turn for the worse and I'm to get her back in asap.

Her drops have now been reduced to every 12-hours (instead of every 8-hours), and she still has her antibiotic to finish.

This is the first time in a little while that I've left the vet's office with a big smile.  :)  Cross fingers things continue to improve for Delta!
Posted by doglove at 21:33 2 comments:

One of my favourite authors, Lori Foster, had an idea to create "The T-Shirt Project" on Facebook; she sent out 300 t-shirts to her fans throughout North America, and other countries, in the hopes that she would receive photos back from those fans wearing a t-shirt, and have a photo to represent each state and province.

So here we are, representing Nova Scotia - rather than just pose in the shirt at home, I wanted to choose a landmark that is clearly recognizable as Nova Scotia.  I would have loved to have gone to Peggy's Cove, but the timing wasn't there.

The Clearwater Seafood sign with the huge lobster is a good choice, I think!  I sent Lori some links to interesting facts about our province as well.

Hope you enjoy the photo as much as I enjoyed taking the dogs out to do this!  Thanks to my friend Angela for being our photographer today. 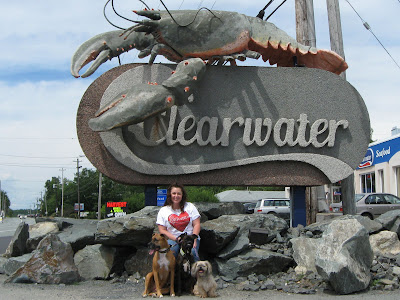 Sigh, when it rains, it pours!  Poor Delta had a vet visit tonight which confirmed that she has another corneal-ulcer (in her right eye this time; the one from January-March 2009 was in her left eye).

Hopefully it has been caught early enough that the RIGHT treatment will work quickly for her and not drag on like it did the first time around.

Sadly, this seems to indicate Delta may be prone to getting them.  My sweet girl is so patient with me with all that I do to her, so at least treating will not be as stressful as it could be.

This was Delta in the healing stage of her previous ulcer (February 10, 2009): 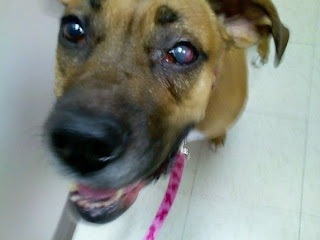 As you can probably guess, Oscar was a pretty sad little boy last night (he actually hasn't been himself since Thursday night when Brosa bounced on him).  We had a very quiet day today, as I was quite exhausted by it all as well, and Oscar slept most of the afternoon away.

He woke up feeling pretty perky by supper time, which is fabulous news.

Tonight's supper (for me) is bbq'd chicken kabobs with a side of garden salad.

Never think that this ordeal has put Oscar off food - the Mooch is alive and well, and begging for chicken at my feet. 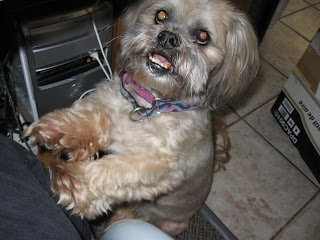 He brought the others running as well. 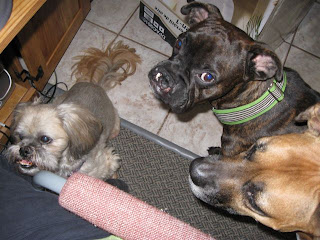