Oscar has a liver tumor

It probably won't be too long before I have to say goodbye to him. :'(
Posted by doglove at 22:59 No comments:

Been a while since I've posted!

On April 1st, I took Oscar to the vet as I had concerns with his sudden excessive thirst and some peeing in the house that week.

His urinalysis was "poorly concentrated, no infection, significant protein".  We decided to do a comprehensive diagnostic profile, and I got the results the next day.  All of his readings were for the most part within the high end of normal, with the exception of his ALP (1094 - normal is 20 to 150) and his ALT (423 - normal is 10 to 118).  Those readings, Dr. H said, were strong indicators that he could have Cushing's Disease (either pituitary or adrenal tumor) or some other type of tumor.  She recommended the Cortisol test (ACTH Stimulation) the next Monday.  It required that he spend the day at the hospital.

Oscar wasn't permitted to have breakfast on Monday, April 4th - I dropped him off and had some other appts while waiting for him.  I was able to pick him up mid-afternoon, and the results would be available later in the week.

Oscar had a few accidents in the home, so I really had no choice but to confine him to our powder room (adjacent to the living room) with a baby gate in the door.  This offered him more freedom than being crated.  He has a pillow, his bowl of water, and a pee pad if he needs it.  (flash forward to today - he has only peed in there once - he has been able to hold it until I get home from work, then outside to have a LONG pee!). 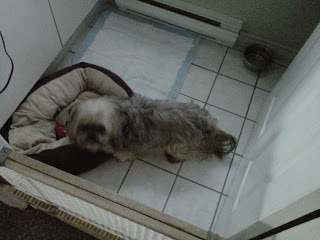 I returned the the hospital Saturday, April 9th to get the results of the ACTH - Cushing's Disease is confirmed.  I needed to take a couple of weeks to think and research on what would be best for Oscar given his age, his Grade 4 heart murmur and now this.  What would be his quality of life if given the very expensive (and risky) Cushing's treatment?

In the meantime, Oscar still behaved like Oscar except for the drinking and peeing.

Until this past week.  He has started to go "off" his food and is not the mooch that he used to be.  Breakfast is practically a non-event for him - a couple of nibbles and he's done.  Overall, he is not himself.  Really tired, seems depressed.

I booked another appt last night to discuss treating him, but to also raise these new concerns.  A physical exam revealed he sounded wheezy, and she was very concerned that he's not wanting to eat.  He has lost half a pound since April 1st (weighing exactly 19 lbs now).  Dr. H wanted a chest xray to see what was going on with him.  Below is the text from my invoice.

Office Exam/Consultation - Brief/repeat.
Not eating so well.
Some weight loss and change of body shape.
Things not consistent with Cushings Disease.
Radiology - Initial Study - 2 exposures (large)
Xrays - reveal a very large heart with increased airway densities (damage or fluid in airways).
Abnormal density in anterior end of abdomen in area of liver, spleen may be a bit enlarged and displaced backward.
We could have an enlarged liver or some kind of mass in the area.
Recommend Abdominal ultrasound.
This whole picture not looking like just a Cushing's case.

And so, we wait for an appt date to take Oscar to Westwood for an ultrasound - hoping for next week, but given that it's a 4 day week due to Good Friday, it may be the week after.  In the meantime, Cushing's is low on the list until we know what we're dealing with.

Below is his xray (I've circled the area Dr. H is concerned about). 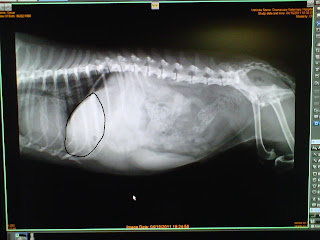 For now, we will say goodbye to the Ewok this morning as he's going to Mud Puddle Paws in Mt. Uniacke for his Spring groom! (and he ate his breakfast this morning!  I mixed in some yogurt for him - for all 3 dogs actually - they love yogurt) 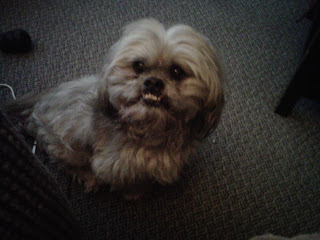 UPDATED: We are back from the groomers - he never enjoys it but I think he did well since I got to be there with him to help keep him calm. :) 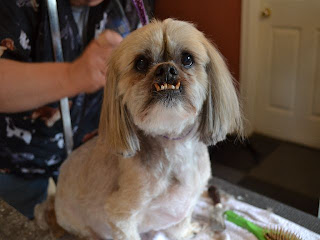 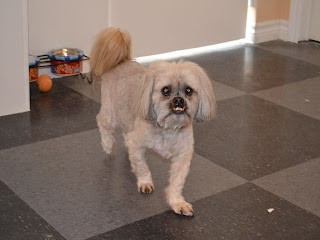 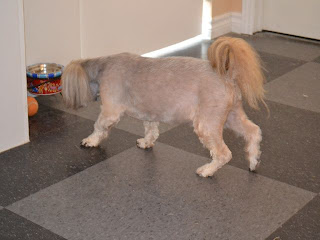