Brosa has reached another milestone!

On Thursday evening, Brosa had his long-overdue annual health checkup.

His rescuer, Lee Anne, and I had both hoped in the past that he might eventually reach 50 lbs and not be such a miniature Boxer (ha ha!), and I'm happy to say that he has!

His 2 year old muscles have matured and he now weighs 51.5 lbs, which is up from 43 lbs last year - we're so proud!  Our vet, Dr. H, loves him, loves his exuberant personality, and says he's in great health.  She cannot believe that he doesn't have any issues with his cleft palate either.   Here's a photo from today. 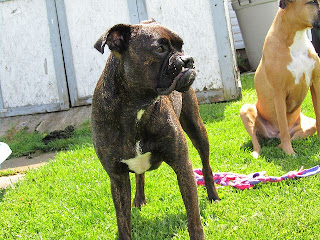 I will always be sad about Oscar's passing (and I find myself missing him a lot today - he would have enjoyed such a lovely day), but there is an upside to his moving on, and that is, the cats, who were the original furkids in this family, now can rejoin the rest of the house without fear of injury.

This is good news for them both - I have been saying that it's especially good for Judah, who is 18 years old and will now get to enjoy a good quality of life as a family member for whatever time he has left.  But I also realized it's especially good for Kayzee too, as she is the more shy one who will be the only cat in the near future.  She will be losing her companion, her mate, and it would have been a tragedy had that happened while Oscar was still alive.  This is her opportunity to be comfortable with all of us again and not be alone when Judah passes on.

The past few days have been spent re-acclimating the kitties to rejoining the rest of us in the upstairs part of our home.  In fact, it only took mere hours on Wednesday for Judah to realize that he could come back upstairs.  He has reclaimed his throne as the King of the household.

Kayzee, being the more skittish one, has been more shy about joining us, particularly since Brosa wants to treat her as a plaything when she runs.  He is learning though not to chase her.  Today appeared to be the big break-through as Kayzee has been shaking her moneymaker all over the house, teasing Brosa relentlessly, ha ha!

Please enjoy the following photos which document the life the cats have reclaimed.  While Kayzee is only seen once below, she has been around a lot today, but constantly in motion which makes it difficult to snap photos of her.  As I sit here typing, she is sound asleep on the back of the couch snuggled with Judah, which is exactly how it should be. 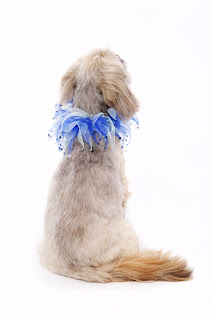 Photo by Sabrina Thurlow Photography - May 1, 2011


I sit here with tears in my eyes to announce Oscar's death last night at approximately 6:50 pm Atlantic time.

This past weekend was the Victoria Day long weekend - unlike last year when it was hot and sunny, this one was cold and wet.

Saturday night, as was the pattern this past month, Oscar stopped eating.  Unfortunately, there was no enticing him to try something else no matter what I prepared or opened for him.  He'd take a little sniff, maybe a little lick/nibble, and walk away.  About the only thing he WAS enjoying were his Marrow Bone and Milk Bone cookies, so I let him have them.

But Monday night, I sensed things were changed for the worse.

When Tuesday morning dawned, he was not on the bed next to me, giving me his usual good morning kisses when I wake.  This time, he was on the floor, about to have a bowel movement.  I was able to get him outside on time - his bowels were a strong indicator that he was failing.

This time, I knew.  His body language told me that he was done and ready.  I made the decision and appointment to say good bye to him that evening.

The air warmed up, and the sun came out.  Oscar spent a good portion of the morning outside with his face in the sun and the breeze blowing his fur.  We went for a final walk up our street and said goodbye to our friend Monica and her Bichon-Shih, Casey, who we have known for years. 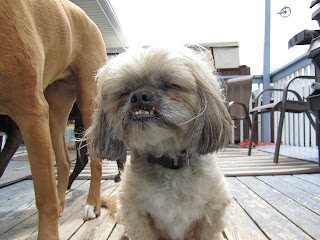 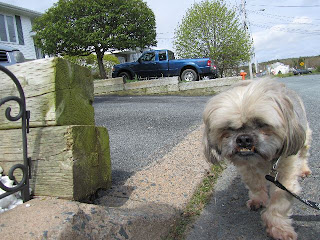 I tried to entice Oscar with some more of his favourite foods, which he rejected, but he did eat some ice cream, but only after Delta and Brosa showed so much interest in it.  :) 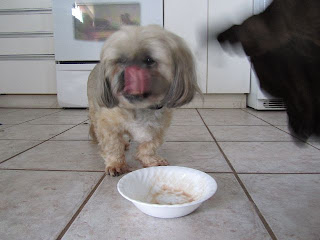 The afternoon turned cooler and it started to rain.  We cuddled on the couch while he napped.  My mum stopped in for a visit and to say goodbye to him, offering to come with me, but I needed to do this alone.

About 1.5 hours before the appointment, we left home and went for a drive, which he had always loved.  He was too tired to stand up on the door's arm rest to look out the window as he'd always done.  I pulled into the McDonald's drive through to get a hamburger for him and he ate a couple of pieces of that.

Upon arriving at the appointment (early), we were put into the room and I sat on the floor, with Oscar in my arms on his back, while I told him over and over I loved him while giving him kisses and rubbing his belly for a good 10 or 15 minutes.  Then it was time.  With his final breath, I held his head, gave him kisses, and he gave me kisses right back.  There was a little flinch when the needle poked his arm.  Then he was gone.  I stayed another 15 minutes with him; I picked up his body and held and kissed him.

Oscar had been a little bit of a challenge the past (almost) 7 years since I adopted him on August 14, 2004.  He was adopted to be a best friend to Delta at the time (I'm convinced he saved her, or brought her back *into* life in our new home).  He was dangerous around cats and was cranky at times around other dogs.  He was a supreme diva about getting groomed and having his nails cut.  All that aside, he was always entertaining and well loved.  I miss him tremendously and always will.  I hope that if there is life on the other side, he and Duncan will be there ready to be reunited with me.

Click here for the Dogkisser tribute for Oscar
Posted by doglove at 07:58 4 comments:

Honestly, I thought by today I would have had to say goodbye to Oscar.  He had begun to stop eating about 1.5 weeks ago.  Thankfully, a friend suggested that I try Medi-cal Recovery canned food for him and he LOVED it - it got him eating again.  I was prepared to live with the results of eating this food (diarrhea/soft stools) but so far, it hasn't been an issue at all except for the pungent aroma going in, AND coming out, lol!

Last weekend, I decided to make a simple ground beef recipe for him at the suggestion of our friend Lee Anne.  It's just ground beef, diced sweet potatoes, chopped green beans, and a large can of Aylmer Accents Petite Cut Tomatoes in Garlic and Olive Oil.  Well, he absolutely loves this too (as do Delta and Brosa).  The first time I fed him last Sunday morning, he threw it up about 5 hours later - I thought he was having trouble digesting it, but it was more likely the fact that I bathed him and took him for a drive that day.

Why did I torment him with a bath?  Because we went to Sabrina Thurlow Photography to get his portrait taken!  His breakfast ended up on her floor (and not her backdrop as I moved him off there just in time thank goodness!).  We spent about 1/2 an hour there and got some very cute pictures.  When I went to view them on Thursday, I couldn't just pick one, and so I purchased the Pet package to get all of the photos on a dvd with the purchase of a certain value of prints/collages.  Here is one photo I can share (I added a "soft glow" effect to it as the photos on the dvd are unretouched - my prints I choose will be touched up in places by Sabrina). 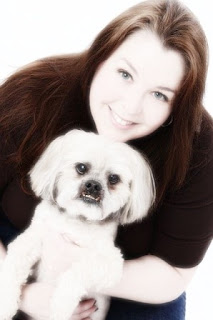 I'm very happy that Oscar hasn't left us yet.  That day will inevitably come, but for now, he's still eating, he's still having good elimination habits (meaning his organs still work), and he's still my rat bastard.  :)
Posted by doglove at 10:56 1 comment: