Oops!  Didn't mean to let my posting slide!  It has been a busy month+ since the last posting.

Delta Update: Delta's leg healed well and there has been no sign of recurrence of the tumor (so far).

Her ears remained on the thick side, in danger of turning into full blown aural hematomas.  Fortunately, her right ear (the site of the original one 2.5 years ago) subsided, but unfortunately, the left ear persisted until it started to get larger the weekend of the 10th.  Then it tripled in size early in the week, swelling completely by Wednesday.

On Thursday, March 15th, she went to see our Vet, whose car we have completely paid for by now, I'm certain, and Delta's ear was to be drained on the spot.  I assisted out back by holding Delta's head to keep her calm on the surgical table (I'm not squeamish so I asked to come back).  Our vet said that with her ear as swollen as it was, her skin would be numb anyway so no anesthetic was given.  A catheter was punched in near the tip, and then the blood/fluids drained away.  A crazy thing to witness in person, even though I'd seen numerous videos over the years.

Next, the canula was inserted where the catheter had been, and then came the hardest part, to stitch it in place.  Delta flinched a bit, but was the best patient ever.  We were done in 15 minutes from start to finish.  She was bandaged for the drive home, and then came the instructions to massage her ear as often as I can, give her warm compresses, keep tip clean, wiggle/rotate the canula, etc.  This will remain in place for 4 to 6 weeks.  She had a one-week checkup this past week, and all is going well.  She's had the occasional filling up overnight or through the day when I'm away from home, but this breaks up and drains easily with massages. 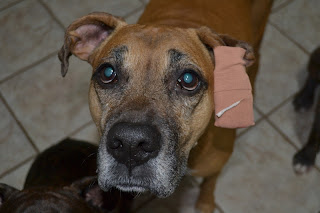 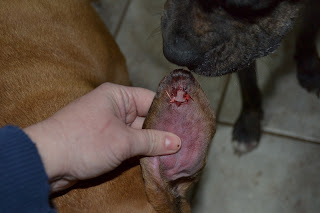 It never seems to end for my dear girl!  However, she doesn't let this get her down and she will still run and play with the boys.  She is the most patient pup, and still the best big sister the boys could wish for.

Walker update:  After several long months, it was revealed that the Advantage Multi was not working for treating his Demodex Mange, and therefore we switched to the dreaded Ivermectin (the rescue hoped to avoid using this, but there simply isn't another effective treatment).  Walker started off very slowly with his dosage.  A little bit for 3 days, a little bit more for 5 days, and little bit more for 7 days, and then finally his full dose for however long it takes.  He has had no side effects apart from early on when he seemed a little out of sorts for 2 days, but that may have not been related to the Ivermectin.

He is full of energy, and doesn't give me any trouble taking his medicine in the mornings despite being told that it tastes awful.  He just wiggles his bum into my legs and takes it like a champ.  Good boy!  He lost quite a lot of hair on his undercarriage and legs while on the Advantage (as the mites were active), but that appears to have stopped and the peach fuzz is coming back!  His horrible breakouts he had have cleared up (no more spot cleaning around my house, my clothes, my furniture, etc... it was like a crime scene at times!).


Walker has started agility class and has just completed week 4 of an 8 week class.  He is loving it and learning quickly.  His tail wags constantly and he just seems so proud of himself when he goes through the equipment.  His confidence is skyrocketing!  I fully expect he will be ready for adoption in about 1 month's+ time, once we know the Demodex is a thing of the past for good.


Brosa Update: Not a whole lot new with Brosa - he is his usual Turdy self, ha ha!  I took him out one afternoon last week for a trip to Point Pleasant Park and downtown Halifax.  He had a great time, and I got very lovely photos of him as a result as well.  Brosa will begin agility classes again when Walker has completed his. 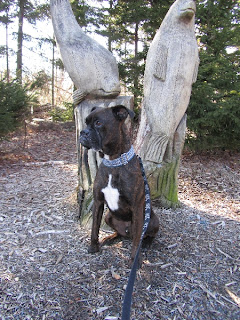 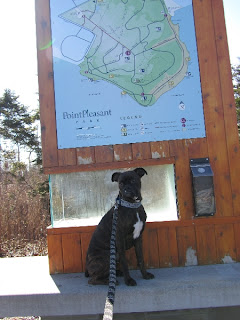 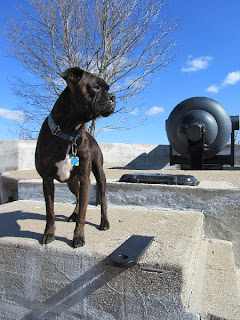 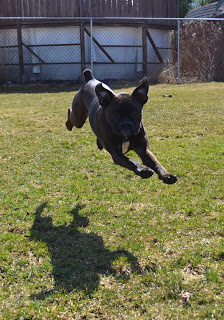 Our friend Tara has a new pup - a Cane Corso who she has named Spock.  Brosa met him the day after he arrived and was very nice with him.  Spock looks just like Brosa, except with a whole face and cropped ears. ;)  I'm hoping they'll get to be great friends. 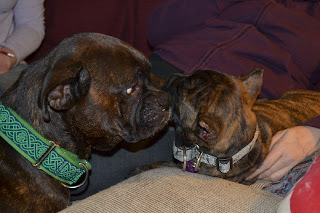 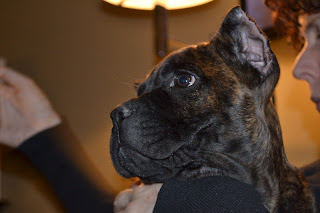