After mama cat and her kittens were delivered to the SPCA, I was informed that Sasquatch, the polydactyl, was a boy, not a girl.  Oops!

Sadly, Sasquatch (renamed Cesar at the shelter) became quite ill, along with mama Kallie.  I found out this week that he passed away.  Kallie is still fighting a serious upper respiratory illness.  The other 3 kittens were adopted, but Circus cat also came back to be treated for an illness.  His prospect looks well though, and he will go back home when he's recovered.

Please keep Kallie and Circus in your thoughts for a speedy recovery.

RIP dear Sasquatch.  I hope the short time you had after being rescued from the cold, cruel world was comfortable for you. :'( 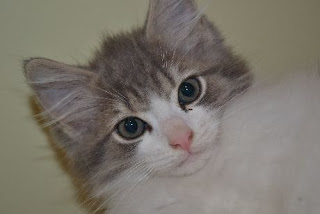 Yep, you read that right!  Last night, I accepted (temporarily I hope!) a mama cat and her four 11-week-old kittens.  They had been abandoned Friday night to the elements outside; a concerned neighbour caught and crated them Sunday, and then they were transported to me to get them out of their neighbourhood until the SPCA opens tomorrow (Tuesday) - closed today due to Thanksgiving.

They spent the night under my deck in a large crate.  Thank goodness we're having summer-like temperatures and there was no rain (although the area under my deck is actually very protected).  The temperature is supposed to drop again tonight, so I knew I'd need to move them indoors and accept the risk of fleas in my house (which I've never had!).

This morning, their rescuer came back to help me bathe them in preparation to move them into my spare room which I cleaned out for them.  The poor darlings are riddled with fleas.  We managed to drown most of the fleas but many still remain.

Once they were moved to the room and given some alone time to dry off, we (me, the rescuer, and another friend) hung out and played with them.  All are very playful and friendly, and appear to be healthy.  We suspect they may have worms along with those fleas, which wouldn't be unheard of.

My third friend brought along some food-grade Diatomaceous Earth to sprinkle over my carpet, in their food, and in their fur, to help kill the fleas.

Another friend dropped in some kitten food and more litter for us.

Another friend is going through her network of contacts to see if a foster home can be found if the SPCA won't take them.

What a great network of rescuers we have here!

Here are some photos.... 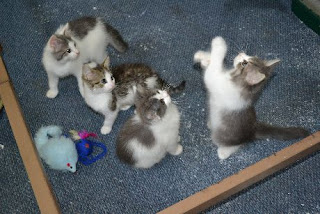 PLEASE SPAY AND NEUTER YOUR CATS AND DOGS!!!
Posted by doglove at 16:36 4 comments: