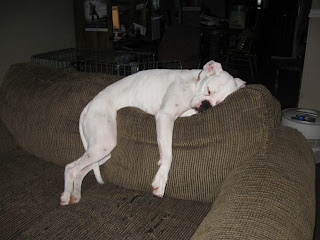 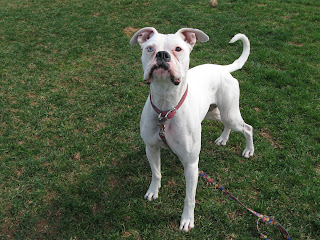 Roxy is a 1 year old (December 2008 DOB) deaf, female Boxer. She has natural ears and tail, and one blue & one brown eyes. She's good with adults and children, dogs and some cats (probably better to be in a cat-free home unless committed to training her to not play rough with them).

So far, she's a sweetheart! Loves having a ball thrown for her and absolutely adores Frisbee! She would make a great candidate as a disc-dog participant, I believe!

She is learning some very basic sign-language as part of her obedience training, and has proven that she has the intelligence to learn fast.

Fairly underweight; could stand to gain about 5 to 10 lbs.

Roxy is spayed and up-to-date on her vaccinations.

Roxy is now listed on the BRAC website along with the Petfinder page for Rescue Dogs Rock!
Posted by doglove at 12:43 No comments: 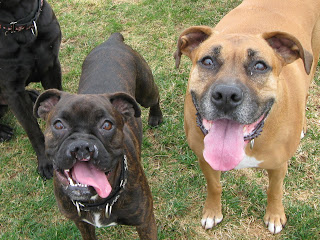 Helloooooooo everyone! Can you believe it's me? I have so much to tell you and can't believe almost a year has flown by. My last update was at 5 months old so I'll just pick up briefly from there, starting with the summer of 2009.

My mom bought us a kiddie pool to play in last summer, and boy oh boy, do I love that! It's great for cooling my feet off and diving for balls, and I usually include a hop into the pool on my rounds when I'm doing my "zoomies". You know what else I love? The garden hose when the pool is filling up! It's great fun to try to drink the water as it sprays out, and mom will also spray it out over the yard for me to chase, ha ha! My big sister Delta likes to lay down in the pool when she's drinking the water. What a weirdo (but I love her!). 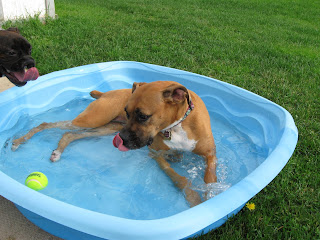 In August, I had REALLY stinky breath for a couple of days. Mom says the breath was strong enough to make someone with a weak stomach lose their lunch! So I went to see a doctor and she couldn't see anything in my mouth, but agreed that I probably had a little infection in my palate. She gave me HUGE pills to take for a week, which wasn't too fun, and mom also had to stop giving me Tripe on my food - bummer! I loved that stuff.
A week later, mom took a photo of my palate and sent it to my first foster mom to show my first doctor (he was going to do my surgery). My foster mom said my doc was absolutely floored by what he saw. He could tell by mom's hand in the picture that I was a BIG boy now, AND my palate closed more since he last saw me! He said he didn't think I would need surgery on my mouth (whew!) since I was doing so well and only had that one infection since my mom adopted me. Mom promised that we would take a little vacation some day to go visit him so he could see me again all grown up:


Picture was great. It turned out really well with the crop. I also printed out his 2 week picture so he could have it as a reference. He saw the new one and was floored. I left your hand in it so I did have to admit that he was 43ish pounds. He was sooooo happy to hear it. I also told him about the infection. So, the next part is up to you. Dave doesn't think he wants to do any surgery on his mouth right now. He said that as long as the infections are minimal he would leave it alone since it's closed so well. So, if you want him to come still, he can but if you want him to just have his neuter there, you can do that too. Dave said in his opinion right now, the trauma isn't really worth anything as a preventative for something you don't know will fix it. If it turns out that he has recurrent infections (more than 2/year) then he would do the correction, at any age. His midline can't be corrected any more than it is and he would only worry about the back of his mouth. The front should expel fine through his nose or back of his mouth.

So, I'll leave it in your court. Ask all you want and you can make the final decision. If you opt to neuter him there that's fine. Dave would still like to see him but just as a reunion in the future if at all as he's super impressed with him. He mauled me a little when he said how amazing it was and what a success story, etc. He doesn't want it to seem that it still may not be a possibility in the future but as of now that's where he'd rather leave it. 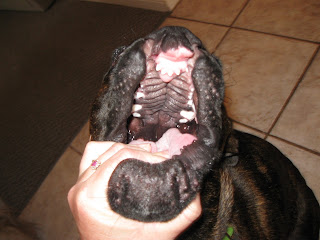 Fast-forward to October 2009. I'm 11 months old and mom took me in to see one of my new doctors for an exam prior to my castration surgery (that's an awful word! I didn't know yet what that was!). My doc was so happy to meet me and thinks I'm an incredible little boy. I weigh 44 lbs on this visit. Everyone says I'm little for a Boxer, but that I look great.

The next week, mom took me in again and left me there. That's the last thing I remember until I woke up. WHAT THE HECK??? So THAT'S what castration means…. and I don't like it one bit. Hmmph! Mom says I was a bit of a sook for a day, but then I was myself again and all I wanted to do was get back to playing with Delta.
But the best news about that day was my doctor had a very good look inside my mouth while I was asleep, and said we should absolutely not do surgery on it because it looks so good now! So long as I don't have a frequent recurrence of infections (more than 2-3 a year), there should be no need to have surgery because it’s a really serious thing to do. I'll just say I'm really relieved!

Speaking of play, I should say here that mom takes me out to dog parks to play with friends all the time, and some times we have little parties in my own yard too. We have a great time!
You might remember that when I was in Puppy Class, the Clicker Leash people were filming me (well, a bunch of us, but you know who the real star was!). At long last, here is the YouTube video starring ME! Wow, I looked so small way back then.
On November 21st, just 4 days before my 1st Birthday, mom had a party for me at an off-leash park with all my friends! It was great, muddy fun, and we had a special carrot cake just for us, made by Three Dog Bakery. Yum! Mom's friend was there too and she "blogged" the day, with pictures. 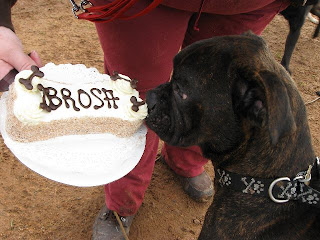 In December, I had a new little sister to play with. Roxi was a foster dog, just like I used to be, and she lived with us for 6 weeks until her mommy and daddy were found. She was a great friend and she made Christmas extra fun for me. 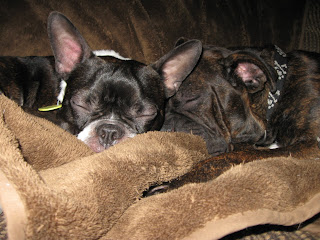 Oh, I also got to meet Santa Claus with Delta and Oscar - that was fun!
And now, here I am today, on the way to 17 months old and still 44 lbs. I have not been sick again at all since mom makes sure that I only eat food that I can swallow good. I have LOADS of great friends to play with, and I love to meet everyone (a little TOO much, mom says, since I'm what she calls a "gooser").
Mom hopes that I will be a therapy dog someday, but right now I'm still behaving too much like a puppy - I just love jumping! In fact, mom and her friend decided we should put that jumping to good use and have started going to disc-dog (Frisbee) classes. I'm still learning, but am having a blast! 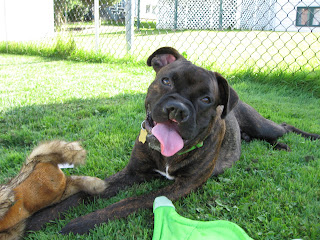 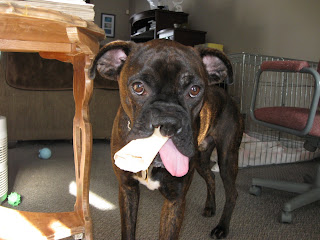